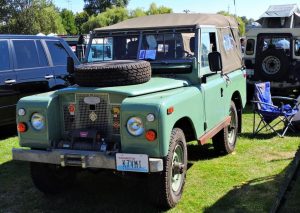 How did your passion for Land Rovers start?
My Land Rover passion began, I suppose, organically through exposure to Landy’s while I was stationed in the UK with the US Air Force, 1970-1974; seeing them on farms, in villages, and at RAF bases near my station. At the time, however, being 24 years old, I was also enamored with British sports cars; over the course of four years, I owned four different cars, Austin Healey, MG, Mini, and Sprite. I became a bit of an Anglophile, eventually designing my homes in the English Tudor style. I guess I was bitten enough times by the Lucas bug that after returning to Seattle in 1975, I started looking for a Landy; it being a perfect truck for the wet, cold, forest-covered landscape that cried out for adventure; I could just imagine traveling to remote places in the Cascade Mountains in my Landy, with dog, wife, tent; living the outdoor life. My passion

What was the first Land Rover you owned?
Finally in 1978, I came across a very slightly used Series III 88 at the local British Leyland dealer in Seattle, and purchased it. Originally, as purchased, it was a sage green hardtop, almost totally stock with Firestone mud tires, a ’70’s vintage Warn electric winch, and free wheeling hubs. Over the years, the Landy has taken me to remote locations off road in the backwoods of Washington, California, Oregon, and Idaho; it has helped me tug trees out of the woods on my Vashon Island homestead, hauled lumber and concrete and been featured in local car shows and parades. I still have the vehicle today, after 39 years; it has undergone a complete frame over restoration due to a serious rollover accident in the Washington State Cascade Mountains in 2012. Today the Landy in its incarnation has been slightly updated with LED lighting, an overdrive, and miscellaneous parts to make its 2.25L engine more efficient; but essentially the original drivetrain is intact and stock; it now sports a canvas top and tailgate, but I plan to annually convert back to the original hardtop in winter.

How many Land Rovers have you owned?
I have owned two Landy’s; the Series III described above, and a Series II 88 that I purchased in Canada with an intent to restore it. However, after the accident, its body as traded to a Canadian friend and others for body panels and parts to allow restoration of the Series III.

Do your Land Rovers have a name? If so, what is the name?
My Landy acquired its name, “Phoenix” in 2012, as I began to rebuild it. An interesting sidenote is that all original pre-accident parts such are now stenciled with a red phoenix bird logo; someday someone will wonder where that came from, I’m sure.

What is your most memorable Land Rover moment?
My most memorable Land Rover moment is not a happy one; it occurred during an off road trip in the Cascade Mountains of Washington State. Traveling with other Landy friends, we were on steep forest tracks trying to exit a rather bad spot we’d gotten into because of a washed out road. While climbing a hill, the right rear axle failed, and the truck drifted backwards until it began to roll down the hill. After six rolls it came to a stop, wheels up over a depression in the ground. The truck’s canvas top and windscreen was completely destroyed; there was extensive damage to every body panel. The Landy, however, saved my life, as I ended up in the passenger side footwell, rolling with the truck; I walked away with some broken ribs, and was airlifted as a precaution to a nearby hospital. I credit the Phoenix for taking care of me, even as it destroyed itself. I recovered the truck, put in a new battery, cleared the oil from the cylinders, and started it up; it purred as though it was very glad to be home; I could not abandon it! Now that’s it’s restored, it will be with me the rest of my life.

What is your favourite accessory on your Land Rover and why?
Over the years, the Phoenix has proven the adaptability that it is so famous for. My favorite accessory is the custom bumper I built to serve as a platform for the electric winch. I am also crazy about the tailgate, donated by the Series II mentioned above, and it’s utility as a table during camping trips.

Complete the sentence: My Land Rover has a Soul because…
My Rover has a soul because it will take care of you, no matter what abuse it suffers; it is so adaptable, it almost repairs itself; it has a sense of humor, expressed by the little jokes it plays using Lucas as an excuse, and insisting on leaking oil no matter how many times you change or re-do things.