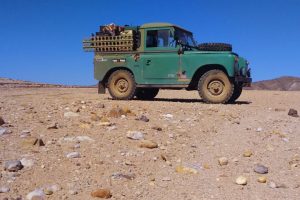 How did your passion for Land Rovers start?
Sitting on my father’s lap in a Series 1 80″ in the Kruger National Park, where he was a Game Ranger ( he was 50 years old when I was born). I suppose the Landy oil got under my toe and finger nails then, and today, at the age of 62, is still stuck, now, in my heart..

What was the first Land Rover you owned?
During military training and our Bush War, I “owned” many Landies, some of which we converted into fighting platforms, called Sabre’s, on the same basics as the “Pinkies”
My first own one was a 1985 V8 110 British import to RSA…

How many Land Rovers have you owned?
Had nine this far. Only have four now, sadly.

What is your most memorable Land Rover moment?
Driving through Damaraland, on a solo trip, 5000km roundabout, in Meraai, topless ( left her roof at home, only windshield and doortops fitted, through the most exquisite landscapes and savannahs of Namibia.

What is your favourite accessory on your Land Rover and why?
I’m a bit of an kwazi purist… Natural patina, wear and tear, no frills, no aftermarket accessories, except a Hi-Lift jack and some extra Jerry cans for water and fuel in remote areas.

Complete the sentence: My Land Rover has a Soul because…
……we are one….
….each one’s soul you can connect with, when I get into any one of them, I can feel their moods before I turn the key…
….I can walk towards someone else’s Landy, and can feel their souls, can sense their feelings, even can imagine what their owners must look like, not by the size of the puddle of oil underneath them, nor the dents, scratches, or highly polished bodywork of some….. They have souls, man…..