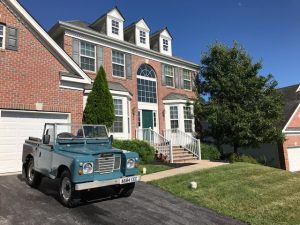 How did your passion for Land Rovers start?
As a child my father owned a P4 80 rover and I’ve always had a passion for classic cars. I have owned a number of British classics including P4 Rovers , Minis, Triumphs and Morris’s as well as my land rovers.

I bought my first series landrover as a daily driver when I also owned a Morris traveller. I can’t explain how that first gear and reverse noise took me back to my childhood in my dads rover !

What was the first Land Rover you owned?
It was a 1983 Series 5 bearing diesel with overdrive and that machine went everywhere and did 80mph. I was told it was stock and had Range Rover diffs as was a cross over year , to this day I question this, but it was a great Land Rover. I sold it not knowing or realizing what a great example (and fast) it was !

How many Land Rovers have you owned?
Just two , I bought my next Land Rover after a series of classic cars as my mini wasn’t big enough for kayaks and kids. I bought it sight unseen after it had been in a barn for 7 years , promptly drove it back after the “dealer” MOTd (inspection) 200 miles and it didn’t miss a beat. Wipers were shot , couldn’t get first or second half the time and th heater didn’t work at all , when it got on the drive I turned it off and it didn’t start again… same battery some years later and it’s all good , just 3.1/2 hours in the pouring rain with lights and wipers and a loose fan belt wasn’t going to work.

Do your Land Rovers have a name? If so, what is the name?
I have to question anyone who doesn’t name their land rovers… my first was called Angus-John Landy and my current one is called simply Andy.

What is your most memorable Land Rover moment?
Going off-road with a mate in Winchester in the UK, he had a 3ltr v6 short wheelbase Shogun, we did some pretty heavy off-roading until we came across an area where the forestry commission had cut down trees (have a peek at this website to know how to maintain them easily and efficiently) and quite a few were on the track , foolishly we went on until a log speared my mates trabsmission hydraulic lines on his gearbox. I had to go past him on a very Rutted track and then tow him about 5 miles to the nearest Road where he could lie and phone the breakdown service, when they cut the 12” log out of his transmission they knew he was sterching the truth , the Landy was Amazing and Keith my friend just pointed and said now that’s a real 4×4

What is your favourite accessory on your Land Rover and why?
It has to be my canvas and sticks, it’s trabsformed my tin box into a safari wagon

Complete the sentence: My Land Rover has a Soul because…
He has never and would never let me down , and if he did I know he’d feel Terrible. I often give him a pat and speak to him or apologize if he doesn’t get out…