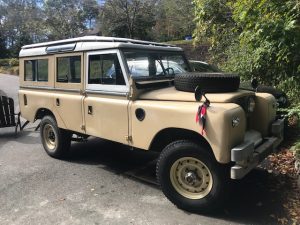 How did your passion for Land Rovers start?
I would say it was when I was in the east coast four wheelers club here in the US. We were open to every vehicle and most of them were jeeps. One day there was a guy who came out with us in a defender. It had just snowed and what wasn’t covered in ice and snow was hip deep in soupy mud. Everyone was all over the place on the mountain except for this guy in the Land Rover. For him, he may as well been driving on paved back country roads. Whenever one of us got stuck, he was there to yank us out (pun indended).

How many Land Rovers have you owned?
1

Do your Land Rovers have a name? If so, what is the name?
Not yet, one will come up though. My kid is partial to “Rusty”.

What is your most memorable Land Rover moment?
Driving back from where I bought the truck (100 miles away) was a truly white knuckle experience. I was used to driving jeeps and not giant, manual steering, unsynchronized gearbox, super loud beasts at 70 mph with a manual overdrive down the highway.

What is your favourite accessory on your Land Rover and why?
The British flag bandana on the left hand side mirror. I have one on the jeep too. It’s a symbol of saying yes to adventure and tying one on to the motor on the landy was like inducting it into the adventure club.

Complete the sentence: My Land Rover has a Soul because…
It’s had a life well beyond the point in time when I got it and was used and abused but keeps on surviving like it has a life of its own.

It’s been used in many films like The Bucket List, Jarhead, War of The Worlds, The Kingdom and Grey’s Anatomy and bears the scars of the Hollywood life, now that she’s retired, I’m focused on getting her back to being the unstoppable family vehicle that she was designed for.