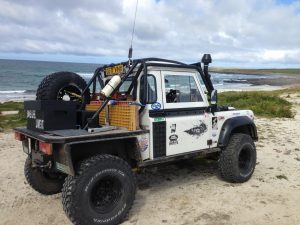 How did your passion for Land Rovers start?
Dad was a mechanic and we owned a rural garage in Shropshire from when I was 5 years old. Living in the ‘garage house’ during the 1960’s meant seeing most types of vehicle in for repair or fuel and, in the case of the local farmers, they were always Land Rovers.
In 1971 I went to work for the local BMC dealer in Oswestry, Ellis’s Garage. We were also Land Rover dealers and had customers who had bought their Land Rovers from us right back to 1949 (and many of them still owned their Series One and brought it in for service and repair).
We had a SWB S2A breakdown truck which was unusual in that it was fitted with the six cylinder 2.6 engine (which was never fitted to 88’s) from the factory. The Ellis family were friends of the Wilkes’s from before WW2 and we always had first shout on any experimental factory vehicles that were not going to be scrapped.
Working with them every day meant that they just became another vehicle along with the Morris Minors (and later Marina’s), Minis, 1800’s etc that we worked with every day.

What was the first Land Rover you owned?
I was lucky enough to have the use of several Land Rovers if I needed one from our dealership so didn’t bother to buy one until the late 1970’s when I came across an S2a 109″ Dormobile conversion. I bought it for , I seem to remember, £100 with an MOT and kept it for a couple of years although I never managed to go on an adventure with it!

How many Land Rovers have you owned?
I developed my passion for Land Rover’s about 25 years ago when I had a small village garage myself and set up a sideline in refurbishing and selling them. Trouble was I started to hate selling them which didn’t make much commercial sense!
Since then I must have had over 50 Land Rovers of different types, including the Discovery that Haynes modified for their Extreme Discovery manual. Currently I’ve got five on the road from an S1 80″ to a trayback 100″ V8 as well as a couple of 110’s and a Disco 3. There are about another six in various states of disrepair for either rebuilds or spares.

Do your Land Rovers have a name? If so, what is the name?
Only my latest one which is an ex-Scottish Hydro 110 that I’m converting to an overland camper. The registration begins RE09 so we christened her the Speedwagon as homage to one of my favourite bands.

What is your most memorable Land Rover moment?
Strangely enough it happened this year at the Billing show. My 14 year old son has now inherited the passion and we took the trayback on the off-road course. We had rushed to get there (it’s a 550 mile drive from home) and arrived just in time for the last Friday PM slot. The trayback has locking front & rear diffs and I’d never had the locking diff on the front before. Starting off with everything locked we came to the second sharp turn downhill and couldn’t get round in one with the diff locked. I shunted it round but the nearside wheels climbed the verge and we were left balancing precariously on two wheels as she tried to turn on her side! My son was hyperventilating in the passenger seat muttering “Oh my God, Oh my God” as I managed to back her up and get back on four wheels. After that nothing gazed him all weekend.

What is your favourite accessory on your Land Rover and why?
52″ LED Light Bar on the roof. It’s like daylight when it’s on and if someone forgets to dip coming towards you it frightens them to death!

Complete the sentence: My Land Rover has a Soul because…
It’s a Land Rover! Even with all of the niggles and problems you get it’s a part of the family now, to be passed on to my son when he’s old enough to insure it.