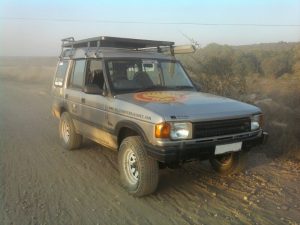 How did your passion for Land Rovers start?
Grew up in the heydays of going to Sodwana bay, St. Lucia and Cape Vidal on the Kwazulu Natal North coast of South Africa. That was where I got the affection for the Series Land Rovers. I still recall the thrill I felt everytime I saw one with a Skiboat in tow. Yes there were many other vehicles that I also remember from that era but the one that stuck as my favourite was the Land Rover. Fast forward a few years and we were bombed with the Camel trophy. The weapon of choice? Land Rover! It just cemented the qffection I had for these cumbersome and mostly finicky 4×4’s.

How many Land Rovers have you owned?
3

Do your Land Rovers have a name? If so, what is the name?
Series 3 Wagon “Ou Vrou” (Old Lady) , 1995 Discovery 1 V8 Guzzie , 2003 Discovery 2 Facelift Goldie (the most beautiful vehicle ever concieved by man)

What is your most memorable Land Rover moment?
There are many but being in the convoy at the Landyfest 2012 at Malonjeni in South Africa was by far the most awesome experience I have ever had.

What is your favourite accessory on your Land Rover and why?
Her stickers or as my daughter Tatiana would say, her tatoos