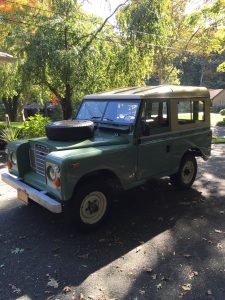 How did your passion for Land Rovers start?
In 1974 my dad was in the market for a 4X4. At that time there weren’t so many choices as there is today. He settled on a Jeep Wagoneer but I convinced and steered him to a Land Rover Series 3 88″. It was a hard sell but I won out in the end. We found out after the purchase that it was the last one sold in the US. British Leland, who owned Land Rover at that time. decided that they didn’t want to burden the 2.25 petrol engine with pollution controls. It would be about 20 years before Land Rover (Range Rover) would again be sold in the US.
I’ve kept that Series 3 for all these years and promised dad that I would restore it, and I did having completed the job last year. It’s a part of the family

What was the first Land Rover you owned?
The 1974 Land Rover Series 3 that I described in the above.

How many Land Rovers have you owned?
All we needed was that one.

Do your Land Rovers have a name? If so, what is the name?
Landy would be it’s name. I always cringed early on when people would refer to it as a “Jeep”.

What is your most memorable Land Rover moment?
The most memorable moment would be when I got lost in the backwoods and the road got narrower and very rocky. Landy just walked right over those boulders and around big trees and through streams to get me back on the main road.

What is your favourite accessory on your Land Rover and why?
Ha, what accessory? The one thing that every Land Rover owner can attest to is that this is a basic bare bones vehicle that has heat in the winter, if you’re lucky.