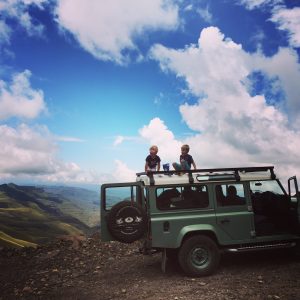 How did your passion for Land Rovers start?
I used to tease a friend about his landy’s breaking down then all of a sudden i wanted one. Go figure……

What was the first Land Rover you owned?
2010 Freelander 2

How many Land Rovers have you owned?
6

Do your Land Rovers have a name? If so, what is the name?
Yes, my defender is called Captain Smek , the leader of the legendary Boov species of Alien. Thats what happens when you let a four year old name your Landy.

What is your most memorable Land Rover moment?
During December of 2015 , myself and my 2 small boys aged 3 and 5 did a camping trip to lesotho. As is traditional, we eat most meals sitting on the roof in case of hyenas and crocodiles. We stopped near the top of Sani pass for a snack and an elderly threesome passed us and waved as we sat on the roof and snacked on junk food. At the top, a storm came in and we took refuge in the pub at the top where we bumped into the same three people who had waved earlier. One of the men in his late sixties came up to me and started chatting. His words touched me, he said, ” its the best investment you can make”. Not specifically the Landy but the time adventuring with your family in your trusty adventure vehicle. He told me that many years ago he too had a landy and took his boys on trips and to this day, even though his boys are now in their thirties, they still talk about the “landy days” That made my heart happy.

What is your favourite accessory on your Land Rover and why?
Frontrunner rack. Its our dining area.

Complete the sentence: My Land Rover has a Soul because…
its woven into my memories of my little boys childhood. I shall watch them grow up with mine.