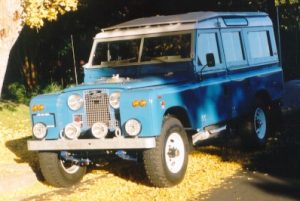 How did your passion for Land Rovers start?
You can also visit https://carguidenation.com/ to  know more .My father joined the Rover Motor Company of North America Ltd in February 1960 …. I wasn’t yet two years old. I’ve been in, under, driven & restored almost every type of LAND-ROVER imaginable (Real LAND-ROVER’s). My father Richard Green became Service Manager for the western USA, and by ’66 became the Product Development Engineer for North America. I worked for him as a teen at the port facility in Benicia, CA; I also did a stint with Land Rover North America. I opened my own LAND-ROVER shop in 1981 in Dublin,CA…. WestCoastBritish.com

Do your Land Rovers have a name? If so, what is the name?
NO! We don’t name cars! Geeze….

What is your most memorable Land Rover moment?
in summer of 1967 my family was vacationing at Incline Village, North Shore, Lake Tahoe, Nevada. We had driven up in dad’s company car, a 1966 109″ NADA Station Wagon (NADA means North American Dollar Area, and these 109″ Station Wagon had 125 bhp 2.6L Rover six cylinder engines with Westlake cylinderheads fitted and 2″ Su carb; this was ONLY sold in North America). This was chassis 34300284
Dad and I went out for a ride in the 109 and soon found ourselves up on Mt Rose which towers over Reno & Tahoe. Sometime in the afternoon I told my dad how I could drive the Land Rover, I kept telling him as we played on the trails in low-range. Dad stopped at one point, got out, walked around to the passenger door, which he opened and said, “Fine drive it!” I slid across the seats and clicked-in the seat belt, fired it up, selected 1st (low-range) let out the clutch and we were off… then i double clutched as i engaged 2nd, then then 3rd. Dad couldn’t believe it! Mind you, I was only just turned 9…. I use to watch him so closely I knew what he was doing and why, and when he asked me about it, I told him. Back at the cabin, Mum asked why we were late, dad said, “We’ve been on Mt Rose and Michael has been driving the Land Rover for the last 90 minutes”. Mum though he was being silly, he later told her how well i did. 🙂
Sometime in 1968 Mum & Dad bought the 109″ from the company, as we needed a vehicle that sat more than 4, out other car was a company Rover 2000TC then a 3500S,,, Mum drove the 109″ back & forth to work M-F. On some days Mum would load it up with Boy Scouts, everyone always wanted to ride in the Land Rover! It was the workhorse of the family, be picking up Rover UK Management from SFO, towing a house trailer on a summer vacation, towing (now) historic racing Aston Martin’s, gone fishing, or just to the market. One day they sold it and bought a new 3500S, I wasnt’ happy, but dad soon brought home new company Series III 88″. I had a number of Land Rover since 1976 when I paid $900 for a 1967 88″… one day in 2002 at my shop in Livermore, California I was out at the store, when I returned there was a Land Rover on a trailer. Todd comes out and is all fired up about this 109 outside, I turned and said, “That’s mum’s 109″ I learned to drive in it when I was 9”. He was blown away… I bought it, and restored it 100% (original engine was sadly missing). Mum, Dad & another famous Rover Motor Co Canada & UK employee Jim Joss all went for a ride the day I finished it and brought it home, home was in front of Mum’s where she use to park it. I still have it, and it now has 30,000 mi on it, and over 250 bhp under the hood!

What is your favourite accessory on your Land Rover and why?
all of them, as most were made by me, or fitted by dad when it was new!

Complete the sentence: My Land Rover has a Soul because…
It’s part of the family!