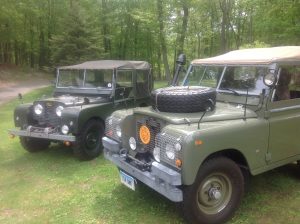 How did your passion for Land Rovers start?
In 1962 when I was 8 our Uncle bought a Series 2A short wheelbase with canvas top and capstan winch. With my 2 brothers, 3 cousins, and various friends we would all pack into it and our Uncle would bound across our rural Connecticut farm fields between our homes in what our cousins described as a “Magoo Ride”, referencing the near sighted cartoon character. At 12 years old after seeing a photo of the miniature Land Rover that Rover built for the children of the King of Jordan I decided I would construct my own version from some spare wagon wheels, 2 x 4’s for axles, and scrap plywood using my dad’s electric jig saw. The result looked more like something from a Little Rascals comedy episode. My dad towed it to the top of our road and taking off on its first run it didn’t last very long as my brothers and their friends simultaneously decided to pile on and it collapsed into a flattened mess.

What was the first Land Rover you owned?
By the time I was headed for college in 1973 to study Architecture at The University of New Mexico I needed to find my first car and being we grew up in one it had to be a Land Rover. I purchased a used 1967 Series 2A 88″ wheelbase with tropical roof and that summer drove it from Connecticut to New Mexico. Living in New Mexico from 1973 to 1980 I drove the Series 2A across the country 12 times, camped and explored with it all over the Southwestern US, including trips south into Sonora Mexico.

What is your most memorable Land Rover moment?
In 1964 our uncle’s took delivery of a Mule which was an “in return” prank gift by his friend to whom our uncle had sent a Monkey. The Mule was incredible stubborn and was named Rubens after our uncles friend. One day Rubens broke free from his paddock and roamed the neighborhood causing trouble. We all piled in the Land Rover to find him and being so stubborn when lassoed he wouldn’t budge. So our uncle tied Rubens to the back of the Land Rover and slowly towed him. As soon as the Mule realized he had no choice he easily followed the Land Rover back to his paddock.

What is your favourite accessory on your Land Rover and why?
On our Series 3 it would be the Fairy capstan winch that has been so useful caring for our land and home not to mention getting unstuck or usually someone else unstuck. On our Series 1 it would be the rear PTO that was once used to power a 1/2 yard cement mixer for our masons to erect our chimneys when we built our house. The Series 1 also has a capstan winch as well.

Complete the sentence: My Land Rover has a Soul because…
Both our Land Rovers have been part of our family now for over 3 decades. The attachment to them is something hard to describe yet seems to run deep into our family DNA. Each Land Rover has a unique personality. Our 3 children grew up in them, went to school in them, camped in them, learned to double de-clutch and drive them. When the dog hears that unique sound of either Series Land Rover engine start up she runs to them and begs to go along.
I’ve been a practicing Architect now for over 39 years and have owned and used my Series Land Rovers for over 43 years. In Architectural practice our design process is traditionally derived from a holistic approach of problem seeking followed by problem solving. The Series I Land Rover is for me one of the most iconic and expressive forms of design function and problem solving in Automotive or Industrial design. Providing a base platform of adaptability for specific needs and able to evolve to suit its users changing needs. As with buildings we sometimes add on or alter function as we renovate to solve a new design problem, yet the buildings core essence remains as the foundation for the next needed change. As the Series I Land Rover evolved through the 1950’s so did the many options and accessories both from Rover and other aftermarket sources. Perhaps more so than any other civilian vehicle of that era. This adaptability tends to create a uniqueness also reflecting the users persona becoming attached in a way to the vehicle. If you really look at any Series I, or II, IIA, III and into Defender for that matter, they soon become tailored to suit their users specific needs. For the same model types that rolled out of Solihull they all really end up looking very different from each other. This individuality is something I think is most unique to the mark and contributes to a sociology that develops around the ownership of any vintage Land Rover.