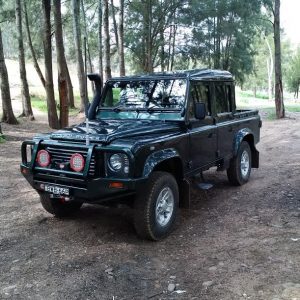 How did your passion for Land Rovers start?
I’ve known them since they were series 2’s and 3’s when I was a toddler. I learn’t to drive in a series 2. Land Rovers have always been the “proper” 4WD to me.

How many Land Rovers have you owned?
I have recently purchased my 4th Land Rover and am looking at aquiring a restoration project which will constitute my 5th.

Do your Land Rovers have a name? If so, what is the name?
I had a 300Tdi 130 called “Turbie”. I sold “Turbie” about Twelve months ago. Our Range Rover is simply known as “Rangie” and the new Defender is yet to be named but is simply referred to as “The Rover”.

What is your most memorable Land Rover moment?
As a five year old child my father would set me up in the driver’s seat of our Series 2a and set the hand throttle in first gear so I could steer the vehicle and trailer around our cattle paddocks after snow while he fed hay out from the rear.