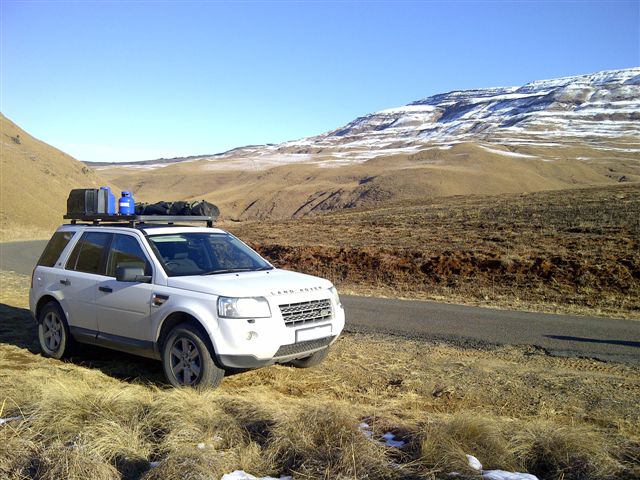 MLRHAS: How did your passion for Land Rovers start?
TS: My passion for Land Rovers started when I still relied on two wheels
to get around I was into adventure and motorbike enduro riding in
those days and I used to follow the odd defender around whenever I saw
them on our off road trips to the mountains. I enjoyed seeing them
conquer obstacles and getting stuck in the mud and the comrade between
the owners always helping each other out then along came the Camel
Trophy events and I knew that one day I would own a Land Rover.
I now have two soul mates (:SWAMBO & LAND ROVER:)

MLRHAS: How many Land Rovers have you owned?
TS: Two (Third one on the way hope it doesn’t take 9mts it’s going to
be a defender 90)

MLRHAS: Do your Land Rovers have a name? If so, what is the name?
TS: Ud (Underdog) Most people underrate it Surprisingly!

MLRHAS: What is your most memorable Land Rover moment?
TS: Not MUD driving Not SAND driving Not Water driving
it has to have been driving between Lotheni and Nottingham road in
the deepest SNOW ever….. August 2012 a lot of fun was had including
recoveries
Oh! and when my mechanic told me the landy had an oil leak.

MLRHAS: What is your favourite accessory on your Land Rover and why?
TS: The CTEK 250S Dual battery and BushPower Solar 68 Portable Solar Panel
system it runs the Engel 40L CHILLING THE BEERS…. and keeps the
foodstuffs fresh as well as charges the camera batteries and runs all
the lighting.

MLRHAS: Complete the sentence: My Land Rover has a Soul because…
TS: It always puts a smile on our faces and its part of the family….